The scientific staff within the university 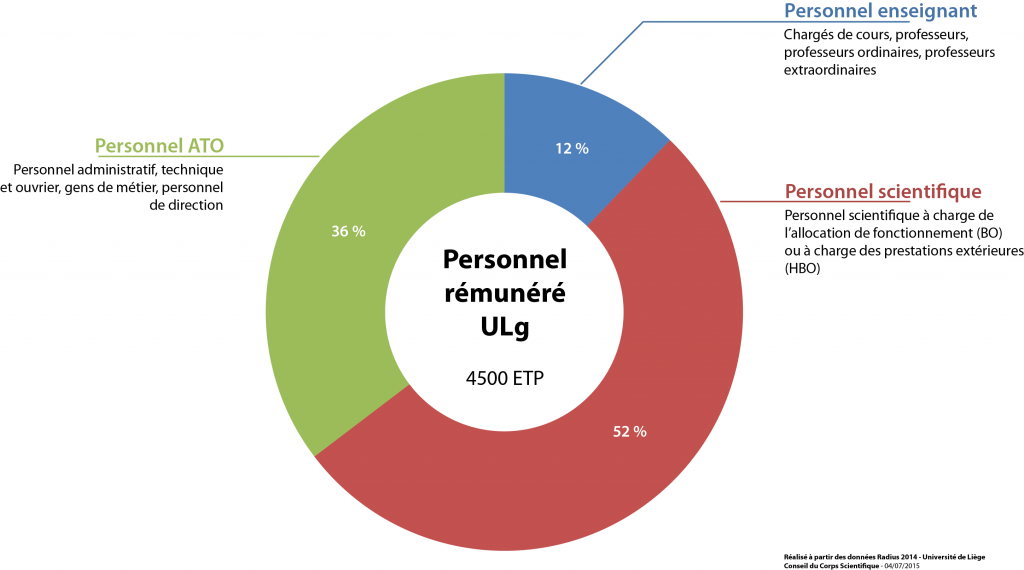 In 2014, the paid scientific staff represented 2300 people or 52% of the University of Liège’s employees (in full time positions), this includes paid researchers by scientific foundations.

In 2015, more than 4,000 people at the University of Liège were working in the scientific community. They carry out research, supervision, and administrative tasks. Unpaid employees represent almost one third of these people.

Members of the scientific staff on external contracts or services : administrative employees, assistants, doctoral scholarship holders, members of the CSL and the ISLV…

Others -indeterminate or multiple work placements

The scientific staff meet at least once a year in a general assembly organised by the Scientific Body Council.

Configuration and rules of the Scientific Body Council

Officially recognised by universitary authorities, the rules of the CCS are approved by the Univeristy Board of Govenors. You can find out more about the updated configuration and rules of the CCS on the dedicated page.

The academic setting is particularly complex and dynamic. Being informed and aware of these changes is our primary concern. The structure of the CCS allows for information to be continuously exchanged and the process to be monitored by the different representatives of the scientific staff in the institution’s bodies.

At the same time, the CCS represents the scientific staff while dealing with the authorities and provides representation in institutional commissions and several work groups. In particular, it ensures that the interests of researchers and research are represented and defended in areas which are of direct or indirect interest to us.

Finally, the CCS has structured itself to be able to make proposals within the university. It relies on its understanding of the strengths, weaknesses, and challenges of scientific research to analyse the development of the research profession and to propose structural improvements, from its own initiative or at the request of the authorities.