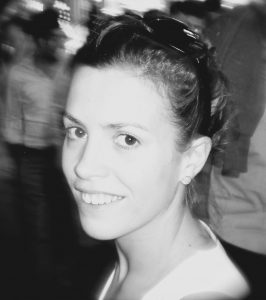 Sara Vigil is an FNRS Research Fellow and a PhD candidate at the Hugo Observatory of the University of Liège and at the Political Economy of Resources, Environment and Population (PER) research group at the International Institute of Social Studies of Erasmus University Rotterdam (ISS). After studying Political Sciences and International Relations in Madrid (UNED), she pursued a Masters degree in Sociology at the University Paris V-Sorbonne. Her on-going doctoral research analyses the interconnections between climate change, land acquisitions, and migration and she conducts fieldwork in Senegal and Cambodia. During her field missions she is an affiliated researcher of the University Gaston Berger of Saint-Louis (GERM) in Senegal and of the Research Program on Climate Change, Food Security, and Agriculture (CCAFS) in Cambodia.

Sara is a research partner of the ‘Migration, Environment, and Climate Change: Evidence for Policy’ project (MECLEP) led by the International Organisation for Migration, a management committee member of the ‘Environmental Diplomacy and Geopolitics’ (EDGE) EU H2020 project, and collaborates on the ‘High-End cLimate Impacts and eXtremes’ (HELIX) EU project. Sara has consulted on environmental migration issues for the World Bank, the Nansen Initiative, and the Food and Agriculture Organisation of the United Nations, and follows closely the UNFCCC climate negotiations as an active member of the Advisory Group on Climate Change and Human Mobility. Sara lectures on international cooperation and migration governance at Sciences Po Paris and Paris 13 University and is an associated team member at the Centre of Philosophy, Politics and Epistemology (PHILéPOL) of the University Paris V-Sorbonne where she previously worked for the ANR-DEMOENV project.