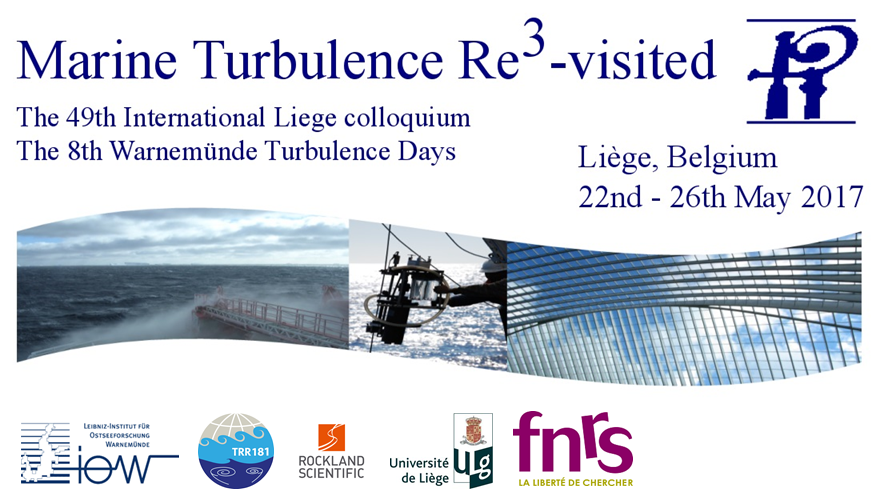 Almost four decades after the « Marine Turbulence » 11th Liège Colloquium in 1980, three decades after the 19th Liège Colloquium in 1987 entitled « Turbulence in the ocean. From the millimeter to the megameter », two decades after the « Marine Turbulence Revisited » 29th Liège Colloquium in 1997, one decade after the 39th Liège Colloquium on “Turbulence Re-revisited” in 2007, the exciting topic of Marine Turbulence will be revisited for the 3rd time during “Marine Turbulence Re3-visited” as the 49th Liège Colloquium in 2017. As already in 2007, the workshop will be co-organised together with the Warnemünde Turbulence Days (its 8th edition), a biennial workshop on specific challenges in marine turbulence, organised by the Leibniz Institute for Baltic Sea Research in Warnemünde (Germany). From decade to decade enormous progress is achieved in our understanding of marine turbulence. A major trigger of this progress is the technological development of oceanic instrumentation, numerical modeling and theory. For the instruments, higher sampling rates, larger data storages and faster data processing facilities generally allow for better resolution but do also open perspectives for novel mechanical, acoustical and optical devices. For the numerical modeling, steadily growing computer resources allow for substantially more complex models and higher resolution than a decade ago. The theory of marine turbulence has further developed towards concepts linking small-scale turbulence, internal waves, surface waves, and (sub)meso-scale dynamics. Tight collaboration between marine and atmospheric scientists in all these fields has substantially triggered progress in the field of geophysical turbulence.

Topics of the Liège 2017 Colloquium on Turbulence Re-Revisited: