The HCFC-22 atmospheric loading still on the rise, but at lower rates

The HCFC-22 atmospheric loading still on the rise, but at lower rates 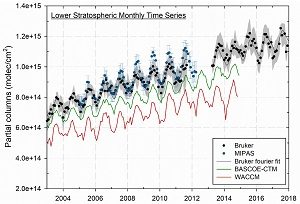 The HCFCs (hydrochlorofluorocarbons), the first substitutes to the banned CFCs (chlorofluorocarbons), are now also regulated by the Montreal Protocol on substances that deplete ozone. The most abundant among them, HCFC-22, is also a potent greenhouse gas. A recent study led by Maxime Prignon, was recently published in Atmospheric Chemistry and Physics Discussions. This paper notably presents an improved retrieval strategy enabling the determination of independent tropospheric and stratospheric time series for HCFC-22.

This new strategy has been used to derive a multi-decadal time series for the Jungfraujoch station, allowing characterizing its long-term trend over the last 30 years. The study also includes the comparison with other observational data sets, supported with model simulations, demonstrating a very good consistency between the various time series.

The trend analysis indicates a slowing down of the accumulation of HCFC-22 in the Earth’s atmosphere, with a tropospheric mixing ratio increase of 4 ppt/year over 2012-2017, instead of 6.5 ppt/yr over 1999-2008.

The final version of this study has now been published in Atmospheric Chemistry and Physics. It is available via this link.