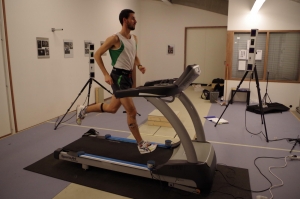 Running economy and fatigue generate a lot of interest in the follow up of middle-distance to distance runners. The biomechanics of stride is also the focus of many researches. In the Laboratory for Human Motion Analysis we explore the potential biodynamic effect of fatigue and the possible relationship with physiological parameters as running economy and VO2 max. To explore this area, the laboratory host efficient equipment for scanning stride in 3D and 2D in running sessions from sprint to endurance. The collaboration with the Sports Physiology Laboratory permits the combination of the two disciplines.

Volleyball is a very popular sport around the world offering spectacular actions in which the points are won, usually, as a result of a rapid and powerful overhead spike. The speed and accuracy of this shot is mostly provoke by the shoulder muscles, internal and external rotators. As this actions is repeated over and over during the training and matches situation it has been hold responsible for different shoulder injuries especially in the muscular fatigue state.

The aim of present project is to investigate to what degree a decrease in the spike speed, assumed to be a result of fatigue, influences different muscular performances (isometric strength, muscle activation) and alter the movement execution.

Influence of β-alanine supplementation on fatigue 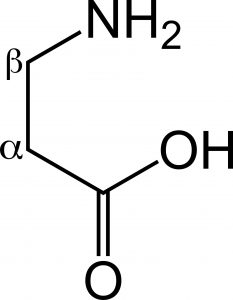 The β-alanine, amino acid precursor of carnosine, has been studied on

numerous occasions without, however, reaching an absolute consensus on its influence on performance. We aim to refine the knowledge of its impact on maximum performance in prolonged jump events.

Fatigue induction tests are numerous but rarely specific to sports where the ability to repeat intense jumps is a determinant of performance (basketball, volleyball, etc.). Our goal is to develop a valid, reproducible and easy-to-set test to explore athlete’s ability to resist fatigue during jumping. 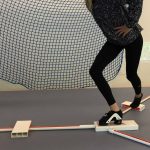 Ankle sprain is the most common musculoskeletal injury. Objective clinical measurements of ankle laxity can be performed radiologically and manually. When performing functional exercises, it is difficult to specifically evaluate the ankle, especially when they are performed under load. The destabilization tool Myolux gives us perspectives to evaluate the postural and proprioceptive aspects more specifically to the ankle. The aim of this study is to establish links between laxity measurements with specific assessments of the ankle.

Foot strike pattern is an important element of running analysis and it’s impact often divides authors. Foot strike pattern influence kinetic, kinematic and spatio-temporal parameters of the runner and require a different muscular recruitment. Many clinicians in the worldwide modify the foot strike pattern of their runner to try to improve perfomance and injury prevention. The aim of this study is to analyse individuals characteristics and difference in terms of strength, mobility and pliometric capacity of runner according to their foot strike pattern. 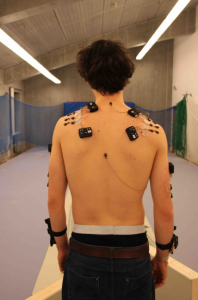 Influence of fatigue on line-out biomechanics in rugby

This study will explore the biomechanics modification of the line-out in rugby following a progressive induction of fatigue which simulates the cognitive and physiological demands of a rugby game. This analysis is carried out with international hookers (seniors and juniors). The ultimate objective is to identify the parameters impacted by fatigue and subsequently to evaluate the effectiveness of training strategies

Influence of fatigue on sprint capabilities in soccer

The aim of this study is to compare the fo 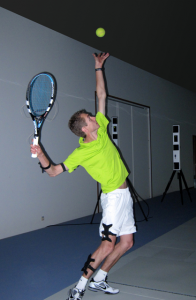 This topic aims to develop an original research concerning tennis serve. In particular, we define a special 3-D protocol to assess the serve of tennis player. In the study of 3-D and 2-D (video) analysis of different tennis serves, we will define the motion pattern and the motion sequences require for the best serves. We will assess some of the best Belgium tennis players into our laboratory. The results of those evaluations will give important information to the coach and to the player for serving performance.