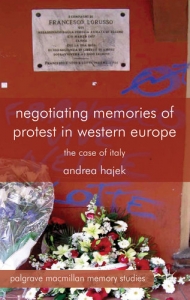 The expression “memories of protest” is a reference to both the case study that is presented in the book and the wider historical, social and cultural context within which the case study is placed, i.e. the protests of the 1960s and 1970s in Western Europe and their collective memory. Thus the first chapters explore the development of social movements during the “années 1968” and in 1977, when a new student movement arose in Italy. Particular attention is paid to the construction of a collective memory of these movements and of the protests they brought forward, in subsequent decades. The second half of the book is dedicated to the case study of a young left-wing activist who was killed by police during clashes in 1977, in Italy. The book analyzes how and why this contentious memory has been negotiated and renegotiated by different memory agents throughout the years, both officially and unofficially, and how it has been used by different generations as a means of reactivating a collective protest identity.

2. In your book, you show that a multitude of smaller, often local memories are challenging dominant, national interpretations of the past. Is it a case of memory competition ? Why is it so ?

There is a lot of competition going on in memory politics, especially when “official” memory is “insufficient” or puts across a “wrong” image of the past. In a country like Italy, where many incidents of political violence in the 1970s (but the problem persists in the present, for example in cases of police violence) have never really been resolved and perpetrators have often been acquitted, all the while official history education and the media provide impartial and biased accounts of the past, there is a strong sense of injustice among citizens. This is due in large part to the fact that the Italian State is weak, unrepresentative and unreceptive to citizens’ claims for justice, so that it is often up to victims and their relatives not only to seek truth and justice, but also to promote a more complete account of the facts and to keep alive memories the State prefers to forget. Hence these memory communities, which are often local though there are also networks and collaborations occurring on a national level, have to continuously challenge dominant narratives by promoting different or “counter” memories.

3. What is the place of emotions, and more specifically of trauma, in the memories of protest ?

Memories of protest generally evolve around issues of violence, for example activists wounded or killed during protests. Hence trauma is a key issue when we analyze contentious memories of (political or police) violence, though not purely at an individual level. In my book I speak of collective and cultural trauma, i.e. trauma as a socially mediated attribution, strongly dependent on how an event is given importance in the public sphere and hence significant for the way an event is subsequently remembered and commemorated.

Similarly, emotions and affect are important aspects of these memories as they allow victims’ families to create consensus in the public sphere. Very often activists who are killed during clashes with authorities are not considered victims in the full sense of the word, especially when perpetrators are to be sought among police forces. Authorities will go at great lengths to protect police officers who are guilty of killing activists, and the wider community will subsequently tend to believe the version presented to them by authorities and media. This means that victims’ families need to develop particular strategies of changing public opinion. They do this by promoting counter-memories of the victims but also by performing “affective labour”, that is, the creation of a “felt relation” between past and present where memories of violence can become part not of an immobile, commemorative type of remembering, but of an ongoing, “living” project that connects people through emotions.

4. How are « memory sites » part of memories of protest ?

Memory sites are a very important aspect of the memory work performed by memory communities. They not only serve as “shrines” for victims’ families to mourn their beloved: more importantly, in the case of contentious memories of violence and protest, they serve as a reminder for the local community – and for society at large – of something that is often still considered as an injustice. They are visible reminders of incidents that have often not been resolved and therefore represent an open wound, difficult memories which are reactivated during annual commemorations and, in the case of memories of protest, also linked to the present. Hence younger generations of activists, who often have not experienced the incidents that are being remembered, are strongly involved in the reactivation of these memories through memory sites.

Andrea Hajek obtained her doctorate degree from the University of Warwick, UK. She is a founding member of the Warwick Oral History Network. She has edited a special issue on 1968 and oral history, and frequently publishes in peer-reviewed journals and on blogs. Currently she holds a British Academy postdoctoral fellowship at the University of Glasgow. 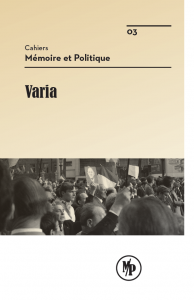