Equine ATYPICAL MYOPATHY, also known as ATYPICAL MYOGLOBINURIA, is a frequently fatal condition affecting grazing horses in autumn and/or spring.  Outbreaks of the disease seem to appear after occurrence of specific climatic conditions.

The lack of a comprehensive scientific literature about clinical signs, diagnostic tools and epidemiology of atypical myopathy induced Veterinary Faculty of Liège to dedicate the first part of its research on the collection and analysis of all available information related to Belgians cases in order to inform, under an appropriate form, horses owners as well as equine practitioners (veterinaries) (see “Publications”).

Epidemiological studies have, since 2006, been enlarged to all European cases, thanks to many Veterinary Faculties and AMAG members.

Unfortunately, no curative treatment is available at this time, but supportive therapy, partially based on the recently identified pathological process in muscular mitochondria from affected horses, may be recommended.

The cause of atypical myopathy has been recently attributed to the action of a toxin named  hypoglycin A. This toxin may be contained in the seeds of several trees of the genus Acer (i.e. the maple trees) and in the past, botanical surveys carried out over the meadows of confirmed Belgian cases of atypical myopathy have consistently reported the presence of sycamore maples (Acer; Aceraceae; Acer pseudoplatanus) in the vicinity of horses.

Figure 1 – Samares of sycamore maple: this is a double samara, each comprising a seed and a membranous wing for dispersal via wind, spin like a helicopter propeller 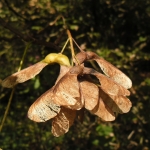 In the United States, the box elder tree (Acer; Aceraceae; Sapindaceae, Acer negundo), another species of maple trees, has been consistently found in cases of seasonal pasture myopathy (a pathological condition similar to atypical myopathy). The box elder is not a European native species but it tends to naturalize. 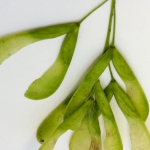 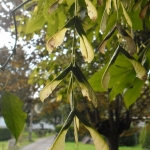 Following research that was supported by The Horse Trust, the Comparative Neuromuscular Diseases Laboratory of the Royal veterinary College of London (UK) now offer testing of seeds, leaves and seedlings for the Hypoglycin A toxin known to cause atypical myopathy. Please go the “Plant sample testing” for further information.

Should a curative treatment be developed in time, it will still remain crucial to prevent the disease outbreaks by setting specific measures.

When facing a horse with a tentative diagnosis of atypical myopathy, a symptomatic treatment can be put in force. It will not attack directly the cause of the disease, but will fight to decrease its clinical effects. Currently, the recommended treatment focuses on (1) limiting further muscle damage, (2) restoring the circulating volume, (3) favouring elimination of the toxin, (4) correcting acid-base and electrolyte disturbances, (5) provinding energetic substrates that can be used by the “diseased” muscle and, (6) alleviating pain if present.

According to literature, atypical myopathy has a mortality rate around 74%.  However, this rate differs significantly from one country and from time to time. For example, during the fall of 2006 the mortality rate dropped to 40% (vs. 70% in other countries).

Factors in favour of a recovery

Nevertheless, in regard to the high fatality rate, any treatment should be attempted only when the horse’s suffering appears limited.

Obese horses appear to be less at risk for the condition. It is worth noting survivors have an uneventful recovery and surprisingly only showed minimal muscle damages. Anyhow cardiac system has to be monitored for several months after clinical recovery.

Factors unfavourable to a recovery